Over 400 people attended the 150thAnniversary Mass at the Cathedral of Saint Matthew the Apostle on Sunday, September 24. Archbishop of Washington Cardinal Donald Wuerl was principal celebrant of the liturgy along with five other priests connected to the Academy.

Tartanfest, the final 150th Anniversary event, took place on Saturday, September 15. Over 200 folks enjoyed Urban BBQ and great music by the amazing band, The Chance Club featuring our own faculty member Laura Meehan. Local breweries, distilleries and wineries were also on hand with a variety of adult beverages for tasting and purchasing.

The 116 girls in the Class of 2018 celebrated their graduation from the Academy with ceremonies to mark the occasion. This class earned over $14,000,000 in scholarships from the colleges to which they were accepted—a record amount in the Academy's history.

The Cap and Gown Honor Awards ceremony took place on Thursday, May 31. The seniors were recognized for their numerous accomplishments. Two students, Nya Myrie '18 and Elizabeth Haywood '18 were recognized with Social Justice awards. Claire Guarini '18 took the Naval ROTC Commissioning Oath of Office delivered by her father William, who is a Navy officer. Valedictorian Brigid Johnston '18 and Salutatorian Chewon "Chelsea" Kwak '18 received honor medals for their accomplishments. To conclude the program, Senior Class President Sydney Bruno '18 gave a final address to the assembly.

On Sunday, June 3, the Holy Cross community gathered at Holy Redeemer church in Kensington, MD, for Baccalaureate Mass. During the Preparation of Gifts, graduates carried mementos from significant activities, academics, clubs, etc. in remembrance of their time at Holy Cross.

On Monday, June 5, the Commencement ceremony took place at the Basilica of the National Shrine of the Immaculate Conception. Members of the 50th anniversary Class of 1968 walked in the procession.

In Chelsea's salutatory address she reflected on the ways in which Holy Cross helped her to broaden her perspective. She said, "the Academy has given me and all of us the opportunity to learn more about each other and investigate new ideas and world views, ones we may agree with and ones we may not."

In Brigid's valedictory address she spoke about the solid bonds she feels among her classmates even though they may not be together physically any longer. "High school is a starting point on the path to knowing ourselves, and now we are leaving for the next part of that journey."

Sylvia Cole Mackey '59 delivered the commencement keynote address. In her moving speech, she shared from her own educational experience which included attending a segregated public primary school in Washington, DC. She spoke about how impactful her Holy Cross education was in her life and how important a solid educational foundation is today. She also offered words of advice to the graduates as they venture forward to college and beyond.

At the conclusion of the ceremony, the graduates met family and friends outside the Basilica in the beautiful spring weather.

See additional details about the Class of 2018 here.

The Catholic Standard newspaper has posted an article highlighting the Holy Cross day of service – "Holy Cross Marks 150th anniversary with Day of Service". The article quotes Director of Holy Cross Social Justice Emily Teter and several Holy Cross girls including Sydney Bruno '18 who said, "Our school was founded on giving back to the community. "So there is no better way to celebrate."

Amazing Day of Service Sends Holy Cross Out into the Community

On Monday, April 23 the entire school community left campus to perform a Day of Service as part of the 150th Anniversary. The event celebrated the deep commitment the founders of the Academy, the Sisters of the Holy Cross, have to social justice. Groups traveled to 18 different locations in Maryland and Washington, DC to complete numerous different service activities such as cleaning, gardening, preparing and serving meals, organizing donations of food, clothing, toys, and housewares, greeting veterans, and visiting with residents. The sponsoring organizations were extremely grateful for the assistance and offered much praise to Holy Cross for the project.

Organization for the Day of Service began before the start of the 2017-2018 school year and has been the yearlong project of Emily Teter, Director of the Holy Cross Social Justice program. She orchestrated all details to ensure smooth operation of the day, which included an introductory and closing program on campus for the girls.

Sylvia was introduced by her classmate and friend Margaret Morris Schacter '59, who shared about Sylvia's dedication to her husband who developed Frontotemporal Dementia after playing in the NFL. She shared about Sylvia's work to support other families of NFL players resulting in the 88 Plan, which provides retired players funds for medical and custodial care.

Nancy was introduced by her classmate and friend Nancy Noonan '69, who spoke about Nancy's days as a student at Holy Cross and her drive to success that continued up to present day. Nancy is the General Counsel at The Catholic University of America and an adjunct professor at the University of Notre Dame Law School.

Lisa was introduced by her sister Dana Ridgway Goldsmith '78, who spoke about the many ways her sister Lisa has supported Catholic education—as a volunteer, as a leader through board and committee membership, and through her philanthropic support. Lisa has been a committed part of the Shepherd Foundation, which has raised over $10 million for Catholic school tuition aid.

The Academy of the Holy Cross welcomed home nearly 300 alumnae along with their guests, and present and former faculty/staff members at the 150th Anniversary All-Alumnae Reunion on Friday, November 10. In the afternoon, groups toured the school, sat in on classes, and attended the annual Powder Puff football game between juniors and seniors. That evening guests enjoyed tasty appetizers, catching up with one another, reminiscing about their days at Holy Cross, walking the hallways, and posing for group photos. It was exciting for alumnae who hadn't been to campus in a while to see the changes in the building, including the 150th Anniversary Heritage Hall. The class of 1982 had the highest attendance of all the classes represented at the event.

A number of classes planned separate gatherings in connection to the reunion at the homes of alumnae or at nearby restaurants.

More than 50 alumnae from the classes of 1945-1959 returned to their campus on Upton Street in Northwest Washington, DC on Sunday, October 22. The annual Upton Street Reunion, which is usually held on the Kensington campus, took place at the special location this year in celebration of the 150th anniversary.

The group attended Mass in the chapel, with music provided by the Holy Cross Madrigal ensemble, followed by a reception in the main lobby. During the reception, alumnae sat together in class groups, posed for group photos, reminisced about their time as high school girls and caught up on the latest news with each other. Some brought spouses who also remembered attending dances at the campus. For many of the alumnae the event marked their first time back to the campus in many years. For some it was their first return since their high school graduation. "It was so wonderful to come back here!" said Sister Ann Shaw, CSC '56. "I'm so glad the Academy arranged this for us!" Her sentiment was echoed by the other alumnae in attendance.

The former campus is now part of the Howard University Law School.

The Catholic Standard article "Academy of the Holy Cross returns to its roots for 150th anniversary Mass" describes the beautiful celebration that took place at the Cathedral of Saint Matthew the Apostle on Sunday, September 24. The article, written by editor Mark Zimmermann, details the special emphasis the event gave to the Sisters of the Holy Cross and the special guests who returned to mark the occasion. Quotes are included from former school heads Sister Grace Shonk, CSC, Sister Katherine Kase, CSC, and Claire Helm, as well as other guests including alumnae, current students, and parents.

Over 400 people attended the 150thAnniversary Mass at the Cathedral of Saint Matthew the Apostle on Sunday, September 24. Archbishop of Washington Cardinal Donald Wuerl was principal celebrant of the liturgy along with five other priests connected to the Academy. President Katy Prebble acknowledged the 10 Sisters of the Holy Cross who attended the celebration and thanked the sisters for the legacy they gave to all who are a part of The Academy of the Holy Cross. During his homily, Cardinal Wuerl acknowledged the tremendous work and devotion of the Sisters of the Holy Cross, in the Archdiocese of Washington, in the United States and throughout the world.

The Mass was organized by Holy Cross Director of Campus Ministry Linda Ruszkowski. Members of the Holy Cross community were involved in every aspect of the service: altar servers, readers, and gift bearers. A combined choir of students, faculty/staff and alumnae, directed by Performing Arts Chair Laura Meehan, led the assembly in songs which included "Cross of Our Hope," written in celebration of the beatification of Blessed Basil Moreau, founder of the Holy Cross priests, brothers and sisters, and the alma mater of the Academy's Kensington campus. The Holy Cross Madrigal singer ensemble sang "I Will Sing to the Lord," written by Sister Marie Cecile (Fitzgerald), CSC in celebration of the 175th anniversary of the founding of the Holy Cross sisters, and "How True It Is," written by former faculty member Michael Turnblom, based on the words of Blessed Basil Moreau. 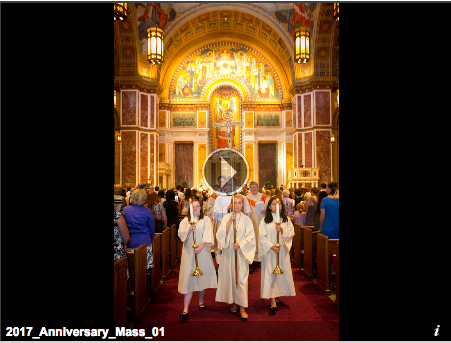 Sister Grace Shonk, CSC, who served at the Academy for 49 years and is now enjoying her retirement at Saint Mary’s convent in South Bend, IN, returned to the Academy to help celebrate the 150th Anniversary. Sister Grace joined the school community for Mass on Thursday, September 14, the Church’s feast of the Triumph of the Holy Cross. She also visited throughout the day with alumnae, parents and friends during an open house for her and the new Heritage Hall. Sister Grace returned on Friday, September 15 for the celebration of Holy Cross Day. She addressed the students at the morning assembly, thanking the Academy for the donation to support the sisters’ ministries around the world. She also gave the start for the Sister Grace Race at the end of the Holy Cross Day field games.

Sister Grace will also be among the special guests at the 150th Anniversary Mass at the Cathedral of Saint Matthew the Apostle on Sunday, September 24. 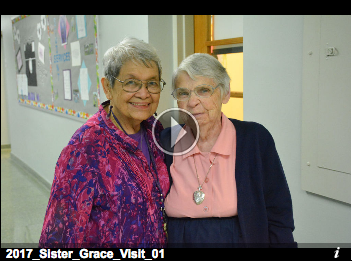 The Academy of the Holy Cross community gathered for its opening Mass celebration on Wednesday, August 30. In celebration of the Academy’s 150th year, six priests joined the assembly for the liturgy: Msgr. John Enzler (principal celebrant), Msgr. Ray East, Msgr. Maury O’Connell, Father Stephen Planning, SJ, Father Martino Choi, and Father Mbonyumugenzi Deogratias. Four Sisters of the Holy Cross also attended the Mass: Sister John Anthony, Sister Vivian, Sister Katherine Kase, and Sister Sharon Mihm ’63. All in attendance received a special 150th pin during the Mass and were encouraged to wear it throughout the year. Following the Mass, Msgr. Enzler led a blessing and dedication ceremony of the new Heritage Hall display space. At lunchtime following the celebration students were treated to cupcakes by the administration. 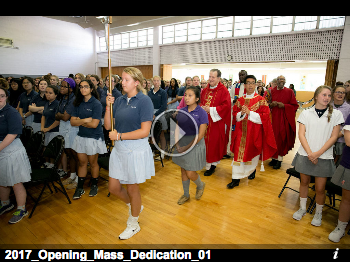 Two area Catholic newspapers, the Catholic Standard and Our Parish Times recently featured articles about The Academy of the Holy Cross’ celebration of 150 years in the Archdiocese of Washington. Both articles discussed the upcoming events occurring this year in celebration of the Academy’s 150th anniversary. The Standard article included an interview with three generations of Holy Cross alumnae: Eleanor Vandoren Teti ’56, her daughter-in-law Maria Capobianco Calandra ’85, and her daughter Rosina Calandra ’17.

Our Parish Times is available in Montgomery County parishes.

Our Admissions Office is open—virtually!